Frontier gets you connected with safety-first installations. Learn more about Frontier's response to COVID-19 here. 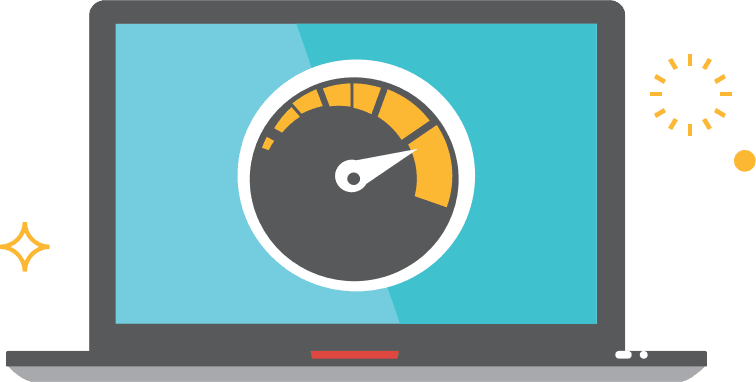 What is My Internet Speed?

What is My Internet Speed?

Here’s How to Find Out.

Have you ever been watching a movie or TV show on Netflix®, and the image looked pixelated? That could be due to a problem with your Internet speed. When it is sluggish, so is data transfer, which can result in lag time and pixelated images. Make sure you’re getting the speed you pay for by performing a speed test on your Internet connection.

To check your Internet speed find an online speed test and complete the required steps. When the speed test has finished, it will show your current ping rate and download and upload speeds. If your speed test results show fewer than the Mpbs you are supposed to receive, you can do a few things to speed up your connection.

Tips To Speed Up Your Internet Connection

There are a few things you can try at home to speed up your Internet.

Router antennas work like umbrellas, so the higher it is, the more coverage you get underneath. And the fewer obstructions around your router, the less it has to work to acquire and maintain a signal, and the stronger the signal will be.

Sometimes turning off the Wi-Fi functionality of idle devices and adjusting the location of your router isn’t enough. It may be your router is simply too old to handle the fastest Internet speed and multiple devices. If that’s the case, you may need to get a new router.

The question, then, is what kind of router to get? The answer to that depends on such things as:

So before you purchase the latest router, consider how you use the Internet. You may not need the most expensive router to meet your Internet needs.

The early days of the Internet are synonymous with the sound of a 56K dial-up modem connecting to the Internet, and American Online’s (AOL) “You’ve got mail” sound. Online games were mostly text-based role-playing games.

The advancement of Internet speeds faster than 56K dial-up has given way to Multiplayer Online Battle Arena (MOBA) games, Massively Multiplayer Online (MMO) games, and virtual reality gaming. Now, instead of typing in commands and waiting for your opponent to counter, you can battle it out in real-time. Faster Internet speeds make this possible as they reduce latency, or the time it takes a ping from your gaming console to travel to the gaming server and back.

Low ping rates and latency aren’t just important for online gamers though. Low ping rates also mean a clearer picture when streaming a movie or TV show online, especially in HD, and no awkward pauses between songs if listening to music online.

Can you feel your stress level rising at merely the thought of buffering while binge-watching Netflix? Kind of like that feeling you get just before the climax of horror movies, right? According to a February 2016 Ericsson Mobility report, neuroscience demonstrates that when your movie or TV show buffers, you start to stress the same way you do when watching a horror movie. 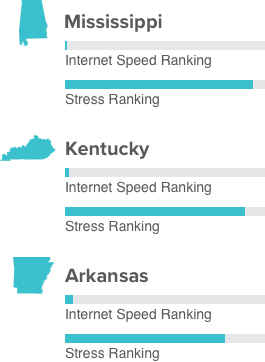 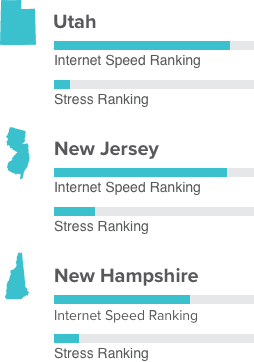 After removing the District of Columbia so we were only looking at states, we found a significant negative correlation (-0.373, significant at .01 margin of error), and that some states struggle with slow speeds and high stress while others have found a balance.

High-Speed Internet. Fiber-optic Internet. Isn’t Internet just Internet? Not necessarily. Whether you access the Internet for news, weather, sports, or streaming content, how quickly that content gets to you depends on the type of wiring.

High-Speed Internet is delivered through copper wires, and copper can react to things like changes in temperature, which can impact your Internet speed. Fiber-optic network, or FiberOptic Internet, is delivered through millions of tiny strands of glass. The chemical nature of glass makes it less susceptible to things like temperature changes, so you'll enjoy more consistently fast FiberOptic Internet speeds.

Copper wiring has been employed by telephone and cable companies for more than 60 years, so sometimes it is all that is available. FiberOptic fiber-optic Internet is a superior alternative to copper, bringing with it faster Internet speeds for HD quality picture and sound, and changing the nature of how we connect.